Rescue 5 and Engine 7, Respond to 1721 Westminister Street, apartment 1107 for a Medic Alert sounding…

This is a guest post by Michael Morse. Check out his full blog at rescuingprovidence.com.

The blood had dried onto the tile floor where he fell, a pool formed underhis head and a stream on his right side. I placed the board on his left sideand with help from the guys on Engine Co. 7 loaded him onto the stretcher. Asearch of his apartment turned up his ID as well as medication for high bloodpressure and diabetes. Our patient was a Reverend, we learned, sixty-two yearsold with blunt force trauma to the back of his head and an injury to his leftelbow.

Was he assaulted? Did he fall because of his low blood sugar level, or washis sugar low because he had been on the ground for an unknown period of time?Was his combativeness due to the head injury or hypoglycemia? Could I getthrough this call without wearing the numerous bodily fluids floating around?

His glucose level was 32. I gave him some glucagon IM; an IV was nearlyimpossible at that point, he was delirious, fighting us with all he had, whichat six feet and at least 250 lbs was a lot. We managed to get our patientsecured to the stretcher, and out of his apartment. Bill from Engine 7 drove ustoward Rhode Island Hospital while me and Mike stayed in back of the truckwrestling with the Reverend. Mike tried to get some oral glucose into him butfailed. For some reason people with low blood sugar fight the very treatmentthat can get them back to normal. Drool and snot mixed with the blood on theman’s face, smearing his glasses which had somehow managed to stay on thebridge of his nose. Knowing how annoying that can be I wiped the glass cleanand put them back on his face.

Somehow his arm broke free of my hold. Before I could grab it he re-openedthe wound on his elbow and smeared fresh blood on the wall next to thestretcher. Mike had his hand full holding the legs down, the patient waskicking up a storm. I saw a good vein on his right arm and tried for an IV,knowing that a dose of D-50 was just what we needed at this point. I missed themoving target, the fight continued until we backed into the rescue bay. 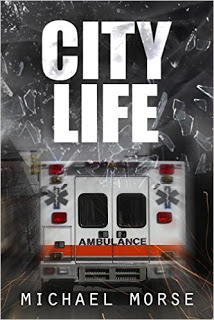 The back of the rescue was littered with debris; blood and mucus drippedfrom the walls. We restrained the patient the best we could and wheeled him in.Security was called, four of us held him down, Joanne started an IV andadministered the D-50. A few minutes later he was alert and conscious. I stayedin his room until the doctor on call showed up. The Reverend looked me in theeye, glanced at my bloody uniform, put two and two together then looked away astears pooled in his eyes.

“I’m sorry for your troubles,” he said. “I have no recollection afterpushing the medic alert button. I’ve been told I get a little crazy when mysugar drops too low.”

“Just a little,” I said, extending my hand to grasp the one he offered. Weshook, he closed his eyes and rested.

Michael Morse worked as an EMT and firefighter in Providence, RI beforeretiring this year. His latest book, City Life is a poignant look at the livesof the people who need 911, and those who respond. Read more about it at http://www.amazon.com/dp/B016QVDCU6.
×